Optimizing Your Life With Proper Image Use

When was the last time you saw someone carrying around a camera to take photos? Lately we are all in the routine of using our smartphones to take photos because it's convenient. We already have the phone with a camera built in, why do I need to carry something else too? Yes, having that smartphone with the camera is convenient and most of the time it takes decent photos which can be used for many things. Here in lies the quandary of what type of image is appropriate for your needs. Below is a review of the types of images available and what the best use for that type of image is.

To begin we need to determine what we want to do with this image once we have it. Do we want to be able to reproduce it as an 8.5x11 photo or will it be used on a friend's website or on Facebook. When determining this we will decide in what way we will be editing it. We start with two classifications of images...Raster and Vector. From there the image type (jpeg, tiff, gif, png, etc) will fall under one of these two classifications. When thinking of raster and vector we need to think of their editing capabilities. 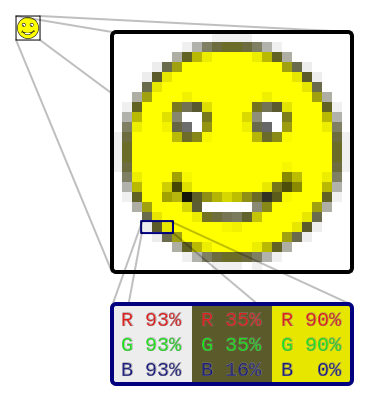 A photo that you just took on your smartphone would be classified as a Raster image because it does not have editable lines. It consists of pixels that comprise and create the image.

When you open a raster image and enlarge it multiple times you will see the individual pixels of color that compose the image. You will see varying pixel shades of that color, this is what makes the image appear to have gradation or shading. One of the most important things to remember when working with raster images is that if you were to enlarge the image from it's original size it will (I cannot emphasize this enough) become pixely. When enlarging raster images the pixels that compose the image increase in size along with the image. They do not "fill-in" the gaps because you are adjusting the photo size. You can reduce the size all you want and the image will maintain the quality but increasing size will decrease quality. So remember when you take a photo or create an image keep in mind what your final intention is and how you plan to use that image and you can ensure the quality is going to be good from the beginning.

Vector images are a whole different beast altogether. Unlike raster images, vector images can be re-sized without loss of quality. Why is that? Well, vector images are based on a series of paths or lines that are connected together via points or sometimes called control points (click image to the left to see sample). These points allow for manipulation of the images using software such as Adobe Illustrator or any other software that has the capability of working with vector images.

Why would you want to use vector over raster? Well, it all depends on what you will be doing with the image. As stated above about raster images, it works well with such images like photographs that you don't plan to enlarge. However, with a vector based you can enlarge the image as big as you want without the loss of quality. In addition to enlarging, vector allows for manipulation of the graphic itself by using the control points. Vector style works well for line art and logos.

Both styles, whether raster or vector, can be created in RGB or CMYK color schemes. But that topic is another beast altogether and will be covered at a later date.